The Basics of Base Rates and Fuel Surcharges

Traditionally, shippers reimburse their carriers for fuel utilizing the Department of Energy (DOE) index in conjunction with a shipper’s predetermined base rate and fuel efficiency. Together, these components comprise a shipper’s fuel surcharge schedule.

But this common practice is based on antiquated systems amid market conditions that no longer exist. The best practice is to use a market-based approach, providing shippers and carriers with transparent and accurate fuel cost calculations, eliminating the need for a fuel surcharge program altogether, including the base rate.

What is the base rate?

The base rate is the price per gallon of fuel that a shipper requests a carrier to include in their linehaul rates, and varies from $0.00 to $2.00, though are commonly between $1.19 and $1.26.  The base rate is paired with a fuel “escalator,” the scale at which the fuel surcharge increases, ultimately representing the fuel efficiency.

Why Are Base Rates Used in Fuel Calculations?

Most shippers still utilize a fuel surcharge schedule and base rate representative of a number representing the average price of a gallon of diesel fuel in 1979.  This was enacted as a common practice when the trucking industry was deregulated creating a free market environment, and carriers needed to protect themselves from soaring fuel costs during the 1979 oil crisis. Though over 40 years old, this process has been handed down through generations of transportation professionals as a “way we’ve always done it.” Today, there’s a better way.

Read more about the history of fuel reimbursement practices, the DOE Index, and base rates, here.

Base rates create distortion in fuel calculations, which is exacerbated when base rates are high and fuel prices are low.

Using a base rate based on fuel prices in the 1980s is irrelevant in today’s market, arbitrarily accounting for fuel costs and adding unnecessary complexity and distortion to the process. This makes it difficult to isolate actual fuel costs, and this lack of transparency precludes both shippers and carriers from understanding their operating costs.

How Your Base Rate Interacts with Market-Based Fuel Prices 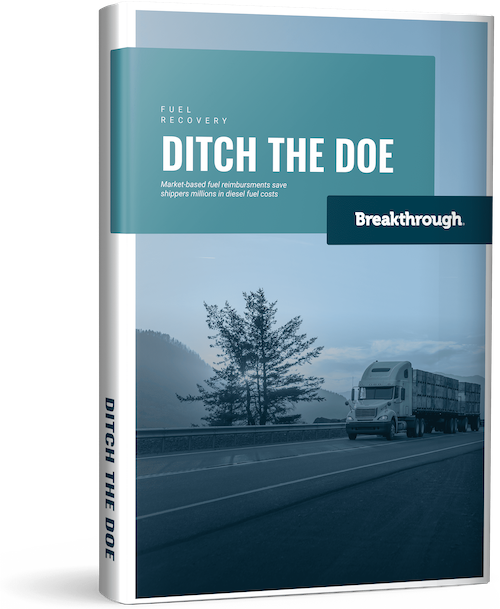 But what is even more notable, is that market-based fuel reimbursements benefit all parties involved in the movement of goods, particularly in times of uncertainty. Both shippers and carriers can have confidence that regardless of how significant price swings may be, everyone is made whole on fuel. Base rates, however, can make even the accuracy of Fuel Recovery prices difficult to account for because it insulates low prices from reimbursement calculations.

During low-price environments, like that created by the spread of COVID-19 and the OPEC+ crude oil price war, base rates become even more problematic. As prices slump below that base rate number, carriers will not receive any fuel reimbursement amounts – because those costs were already contracted in linehaul rates. Further, shippers are likely overpaying for the actual amount of fuel incurred through those movements, because all variability below the base rate threshold – like the $1.26 per gallon base rate used in these examples – is lost in the calculation.

Managing Base Rates and Fuel Efficiency

Additionally, actual fuel efficiency data can be clouded by the use of base rates and fuel surcharge schedules. For shippers using historic fuel surcharge practices, fuel efficiencies used to account for reimbursements today may be anywhere between 5.5 and 6.5 MPG. But, with the introduction of newer drivetrains and evolving technology to fleets, overall fuel efficiency will continue to increase. In fact, research suggests that some fleets can actually achieve 8 MPG or higher across their entire fleet.

As shippers align to higher, more representative fuel efficiencies, fewer gallons of diesel fuel are accounted for, ultimately lowering the cost associated with moving their goods to market.

Organizations that continue to operate with a base rate are only able to manage the cost per gallon above the base rate. This only allows a shipper to capture around 50 percent of the savings associated with making an MPG adjustment in their calculations. This mutes the benefits of a fuel efficiency increase and distorts fuel costs for both the shipper and the carrier, making budgeting processes opaque.

Shifting to a Zero-Base Strategy

By moving to a $0 base rate, shippers can completely separate fuel costs from freight costs.  This allows them to commit to fully managing the fuel used to move their goods to market, and in turn, create better transparency for themselves and their carriers.

When fuel costs change, no matter how steeply, fuel management strategies that reimburse carriers using a $0 base rate can account for every cent of fluctuation, even when prices drop below typical base rate levels. In addition, fuel efficiency increases will be captured fully, and will better reflect the true fuel consumption across networks. This, in turn, can result in significant savings and an increased incentive to align fuel efficiencies across a shipper’s network to industry best practices.

…“Everything other than a zero base is artificial and manipulated.”

Despite the fact that base rates lack accuracy and transparency, many shippers and carriers still utilize them in fuel calculations, so it is important to understand how they operate, and what it means for your cost relationships.

Implementing a zero-base strategy ensures that the focus between both shippers and carriers is on the value of the service and capacity delivered by the carrier. As long as base rates are still utilized, neither party is able to fully manage fuel costs or elevate their fuel strategy.

Breaking it Down | Zero Base Rate Explained