Most shippers reimburse for fuel with fuel surcharge schedules handed for generations without questioning why they are used or whether they continue to fit today’s strategies. Though each schedule may vary slightly, most of them use the Department of Energy’s weekly price index as an input to calculate reimbursement costs.

But this practice is outdated and inaccurate, and it is one of the only transportation management mechanisms that has not been renovated or revisited for decades.

The Inaccuracies of a Fuel Surcharge Index

The reality is, the Department of Energy’s (DOE) Diesel Fuel Price Index is a weekly average for fuel prices across the country. In 2019, shippers who used this price index to calculate their surcharge rates over-reimbursed for fuel by an average of 34 cents per gallon.

Compare average pricing mechanisms to the benefits of a market-based approach in this simple infographic.

When calculating diesel reimbursements with a surcharge index, these four factors are completely ignored creating one uniform price for every movement. In reality, prices of fuel can vary dramatically across shipments.

Switching to market-based reimbursements brings fuel into alignment with broader supply chain agility and capitalizes on the best data available to the marketplace. Making this adjustment can result in nearly 20 percent savings in transportation fuel costs compared to traditional methods.

If DOE-based surcharge programs are so inaccurate, how have they endured for more than 40 years? Its inception is antiquated and couched within the market dynamics of the 70s and 80s, making it largely irrelevant under today’s market conditions. Delving into the history of the DOE’s national fuel index and its use in transportation sheds light on its limitations in today’s supply chain environment, leading shippers to seek more accurate fuel reimbursement solutions.

History of the DOE Diesel Fuel Price Index in Transportation

To understand how a distorted and inaccurate practice endured for several decades, it is important to consider its initial purpose. Recognizing how, and why, DOE-Index based fuel surcharges were the right fit for older market conditions illustrates how arbitrary its use has become in 2020.

Before 1980, trucking was a heavily regulated industry in the United States.  Established in 1887, the now-defunct Interstate Commerce Commission (ICC) allocated a limited number of lanes to carriers that petitioned to use them.

When carriers wanted to move goods along a new route, they had to file a request with a proposed price along that lane with the ICC. If approved, the carrier would be given a near-monopoly on that freight lane. Shippers were charged a predetermined price by their carrier. By the same token, if a carrier wanted to adjust its rates on that lane, they would need the ICC to approve the change.

The regulatory environment during the ICC’s governance created a more stagnant rate environment than is typical in today’s rapidly changing transportation industry.

In the 1970s, two international incidents altered the way the trucking industry charged shippers for fuel.

In the fall of 1973, Arab members of OPEC launched a six-month oil embargo against the United States and several other countries. The embargo halted oil exports to the U.S. to gain economic leverage in the face of the falling price of the dollar—a trend sparked by U.S. monetary policy under President Nixon. Nixon’s move away from the gold standard sent the price of the dollar into a decline which ultimately decreased revenue for OPEC’s 12 member-countries—whose contracts were priced in U.S. dollars.

OPEC also used the embargo to penalize the U.S. for backing Israel during the Arab-Israeli war, resulting in a constricted oil supply and a fourfold increase in oil price. This created a profitability crisis for carriers and individual drivers because under the existing system they weren’t being reimbursed enough to cover fuel costs.

In response to the price increase, the ICC granted emergency authority to carriers to instill temporary surcharges at up to 6 percent of maximum revenue in 1974.

After the OPEC embargo ended, oil prices remained stable for five years. Then reduced production from the Iranian Revolution in 1979, followed by the Iran-Iraq war in 1980, created another oil shock. The ICC responded by allowing carriers to adjust their pricing through a percentage-based fuel surcharge, and a process that allowed for the more rapid filing of new rates.

Base Rates Emerged Amid an Evolving Transportation Landscape

The Motor Carrier Act was passed in 1980, deregulating the trucking industry, and eventually disbanding the ICC

Read more about the benefits of eliminating base rates from your fuel reimbursements here.

Around this same time, carrier competition boomed, and the number of trucking companies nearly doubled. This new free-market competition created the need for differentiation. New mileage-based rules for fuel surcharges were established that coincided with the price per gallon of diesel at that time. This is why many shippers today have a base rate of $1.20/gallon.

Most shippers and carriers may not realize that this commonly used benchmark is arbitrarily based on a historical price from 1981. With that in mind, it is clear that it has no correlation to current market pricing and becomes an unnecessary input to your fuel cost calculation.

In 1981, the most readily available source of fuel price data was the newly-established Department of Energy’s On-Highway Retail Diesel Index. As both shippers and carriers grappled with variable pricing structures, they needed a shared source for pricing. Despite the fact that this index was never intended to be used for this type of cost calculation, its use endures widely today.

The DOE index is based on the national average for diesel prices, collected on a weekly basis from a sample of fueling stations throughout the United States. This number is averaged in two ways: nationally, and geographically within the Petroleum Area for Defense Districts (PADDs).

The national average combines fuel prices from Maine to California, North Dakota to Texas, and everywhere in between to produce one weekly price utilized for the entire country. The heat maps below show how this methodology drastically reduces the accuracy on a shipment by shipment basis. The factors that influence pricing on each lane in your network are entirely unique making one stagnant price inaccurate.

Some shippers try to drill down into more accurate calculations by using PADD regions. But this is only marginally more accurate – and scarcely more relevant in today’s marketplace – than the DOE standard.

PADDs were created during World War II to allocate fuel to consumers and businesses when a large portion of the U.S. fuel supply was needed to support the war effort overseas. These geographic delineations remain unchanged from their beginnings 75 years ago, rendering them irrelevant to today’s population distribution and regional price dynamics.

Regardless of which methodology you use to calculate your fuel surcharge, both programs calculate rates based on practices and data that are more than 40 years old. They are arbitrary in today’s marketplace and have little correlation to the actual price of fuel purchased along a freight lane.

Despite today’s rapidly evolving economy—with volatile fuel prices, revolutionary technology, faster speed to value, and a proliferation of data to enhance operational transportation practices—fuel reimbursements have yet to evolve since the 1980s.

In few other industries are antiquated methodologies tolerated, yet transportation seldom questions the use of base rates and fuel surcharge schedules. In no other area are data points from the 70s and 80s acceptable, so why is it standard practice for a line item that costs between 20-30 percent of your transportation spend?

Fuel enables the movement of goods but does not add value to the service provided by the carrier. It should, therefore, be a pass-through expense. Depending on the market, and lane being traveled, traditional reimbursement practices are unfair for one party or the other. With old price calculations, everyone is at the mercy of the market.

Breakthrough creates transparency and visibility into the true cost of fuel so that the amount shippers reimburse is reflective of what carriers actually incur at the pump. Compared to the DOE Diesel Fuel Price Index, Fuel Recovery calculations eliminate four key distortions. _ _

The resulting accuracy reduces fuel costs for shippers, ensuring they never overpay for the fuel that moves their goods to market. Carriers are made whole on fuel reducing the risks associated with fuel price estimates, making it a true pass-through expense.

Read how Breakthrough is helping elevate transportation strategies, directly from our clients. 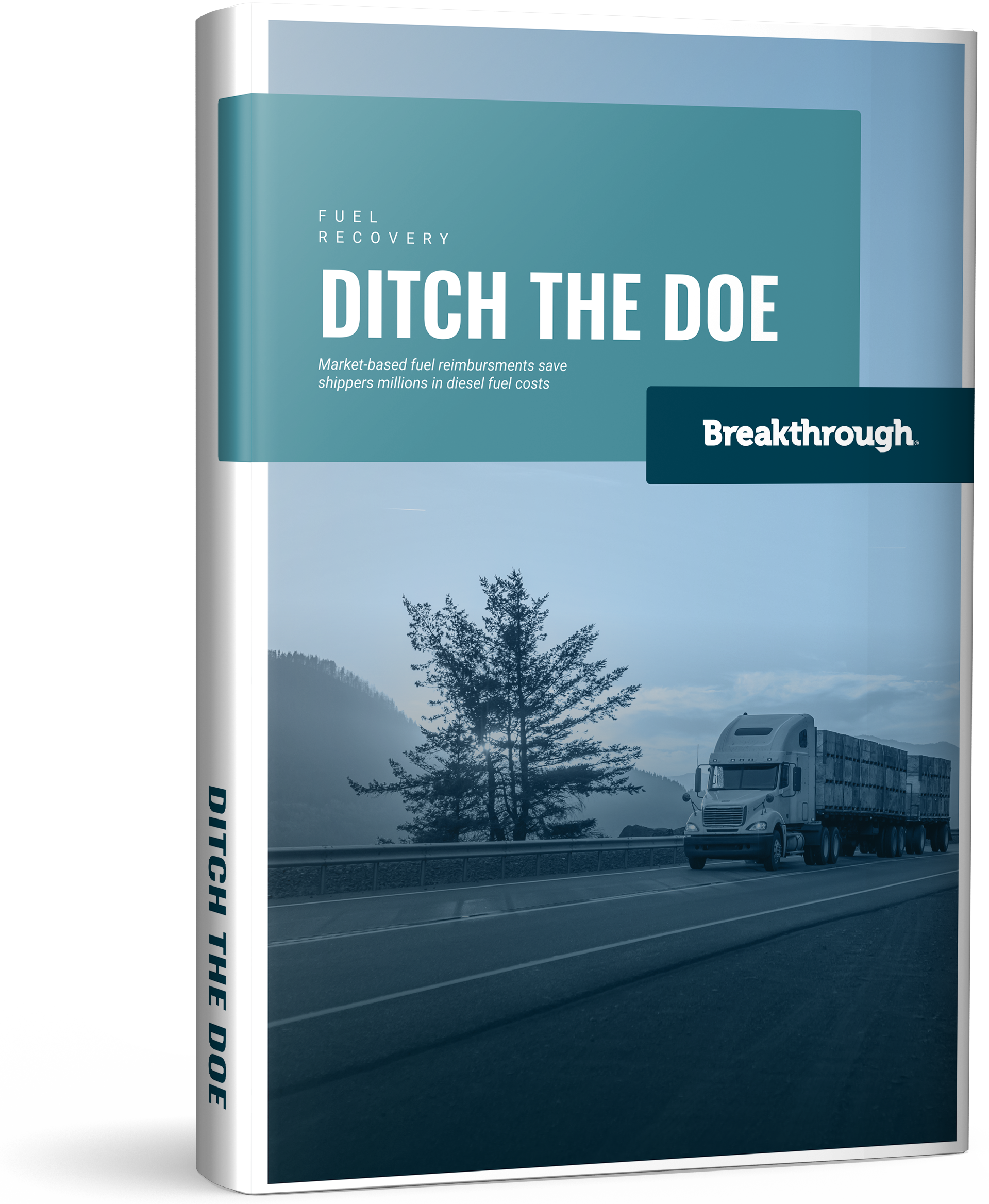 Now, in 2020, Fuel Recovery manages over a billion gallons of diesel fuel spanning more than 16 million shipments across some of the world’s most recognizable brands. With every shipment, Breakthrough is able to better understand the intricacies of our clients’ networks so that we can create solutions and strategies that bring them an ongoing competitive advantage, regardless of market behavior. Even in the most volatile and disruptive fuel market trends, Fuel Recovery ensures that shippers’ fuel reimbursements are sensitive to changes in diesel prices.

Breakthrough fundamentally disrupted the way the transportation industry thinks about fuel management, and we continue to foster this spirit of innovation with new solutions every year. If your organization still uses the DOE Diesel Fuel Index to reimburse carriers for fuel, it’s time to take advantage of better data and industry best practices to bring your fuel management strategy into the 21st century.