The Viability of CNG in Supply Chain

The discussion surrounding the viability and future of alternative fuels becomes ever-more mature as infrastructure becomes more developed, technology more intuitive, and markets demonstrate unpredictable volatility. More than ever before, diverging from traditional diesel fuel to move goods to market is no longer a hypothetical, futuristic goal—it is, and should be, happening in the present.

As 2017 demonstrated, diesel fuel prices fluctuated drastically due to unforeseen weather events, state tax changes, and international geopolitical factors. At their highest, average US diesel wholesale prices reached 270¢/gallon and stooped down to 202¢/gallon at their lowest. That is a 68 cent difference in one calendar year—a variable cost that is difficult to account for in annual budgets, despite using the most advanced data and forecasting models available. The volatility of energy, which makes up as much as 30 percent of your total transportation spend, puts your overall transportation strategy and budget at risk.

For this reason, the industry seems to be pointing in one direction: diversification. Diversifying fuel portfolios mitigates the risk associated with any one fuel type and its unique challenges and volatility.

One of the most viable fuel options on the market from a risk management standpoint is compressed natural gas (CNG). CNG has been a part of the discussion since it first hit the market in the 1980’s, but until recently has struggled to maintain market share due to the lack of practical viability of the technology. Today, this is no longer the case as is typical with the maturation of any disruptive technology. Tax credits for the purchase of CNG vehicles, major infrastructure expansion, advancements in alternative fuel technology, and continually stringent emissions reduction protocols have made the CNG network we see today much more successful. 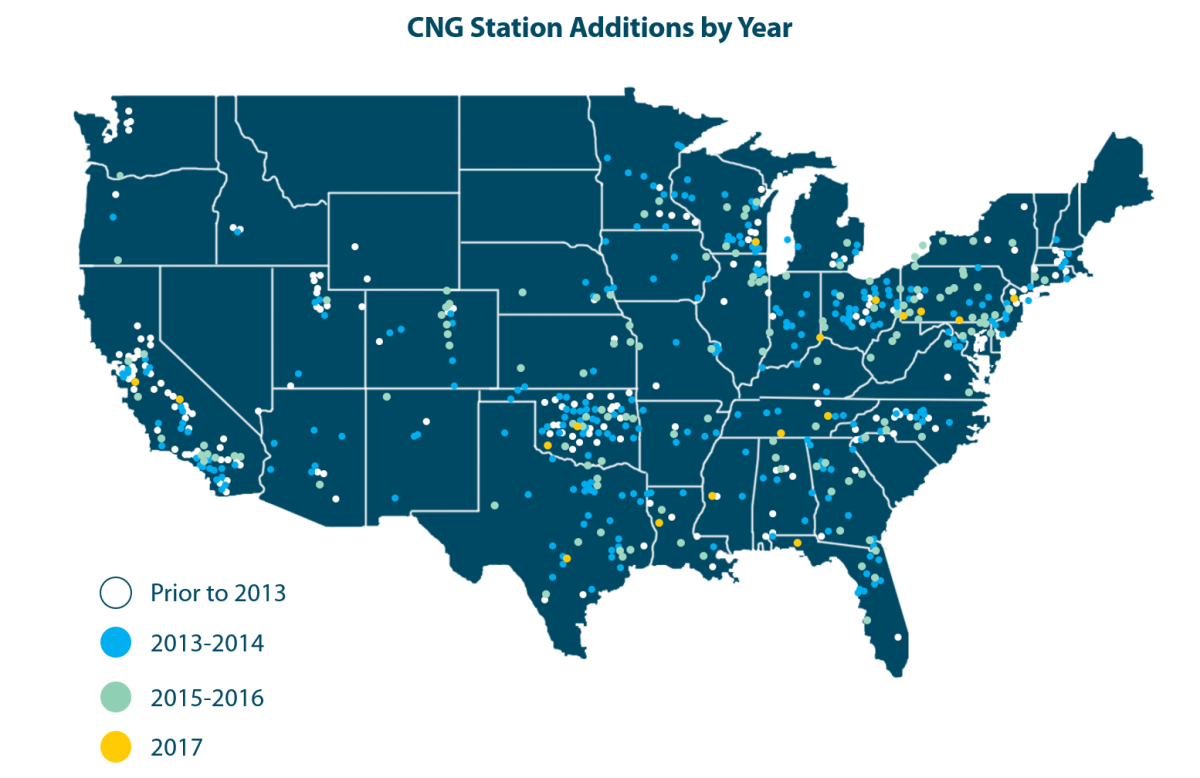 The true value of CNG is most evident when directly comparing it against more traditional transportation fuel types like diesel. In 2017, national average prices indicate that in high diesel price environments, CNG becomes not only viable, but attractive to shippers. Its stable price point, as illustrated below, is significantly more insulated from market disruptions that affect diesel prices. Each fuel type is mutually exclusive from a supply chain perspective, occupying separate pipelines and having higher concentrations in different regions. Disruptions to one almost never influence the price of another. 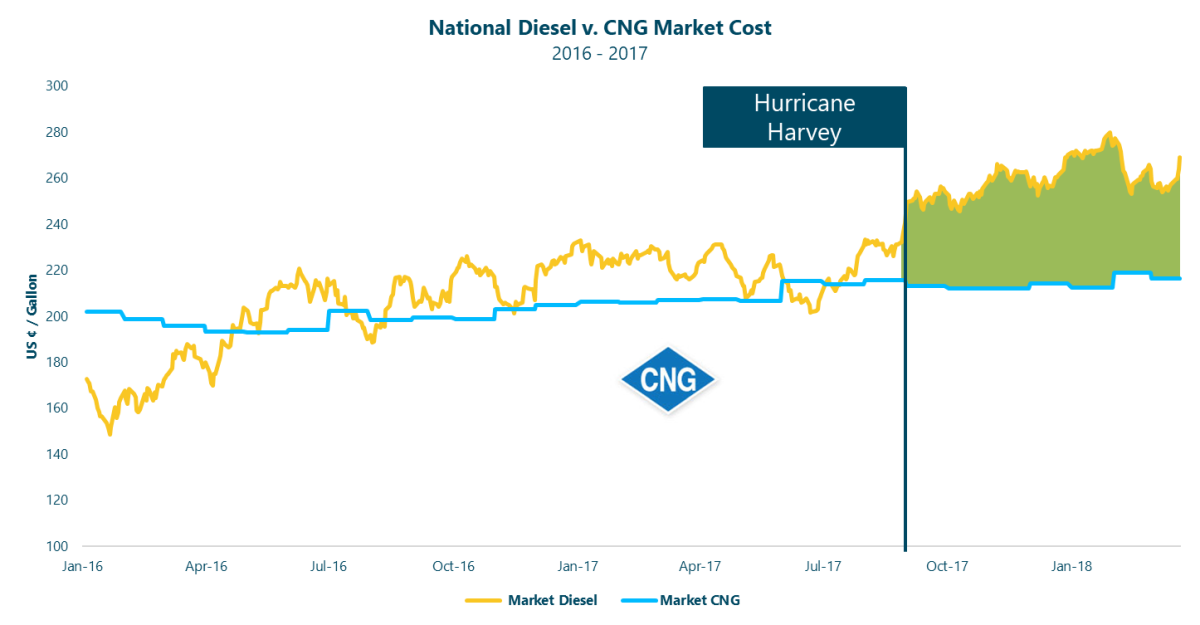 A “natural hedge” exists in CNG pricing. CNG prices are most commonly adjusted monthly, compared to weekly or daily models, allowing disruptions to pass in the interim period without having to pay for those significant fluctuations immediately. Investing a portion of transportation spend and resources into a CNG network benefits from stability of price point, making budgeting decisions easier and incidental costs less significant.

The actual CNG commodity makes up a much smaller portion of the total cost buildup for the fuel. Compared to diesel where nearly 70 percent of the total cost is attributed to the commodity, the CNG commodity only makes up 25 percent of the total. Instead, steadier cost components such as compression, distribution, and taxation costs make up the bulk of the end user’s price. A smaller percentage means that even when CNG commodity prices change drastically, total retail price fluctuations are muted. This makes final CNG pricing both more favorable and more stable in the long term.

Expanding Infrastructure Across the United States

One concern of adopting a new fuel type at a larger scale is the presence of infrastructure to support a network in a cost-efficient manner. While diesel is one of the most familiar and expansive fuel types used in North America, CNG infrastructure has increased significantly in the last ten years, with more than 700 heavy duty public stations in operation across the United States.

Much like diesel, natural gas prices vary across the country.  A targeted approach that analyzes natural gas and diesel prices in a specific geography, recognizes the fuel efficiency differences, and takes into account availability of infrastructure is important in identifying areas of economic opportunity.  The map below shows a sample of states with favorable economic conditions for fuel savings when converting to CNG.  These figures do not include state or federal incentives, which will improve the value proposition.

Among several states, the highest benefit of adopting CNG technology exists in California and Illinois—which have the highest concentration of CNG fueling stations in the country, though opportunity across geographies remains imminent. 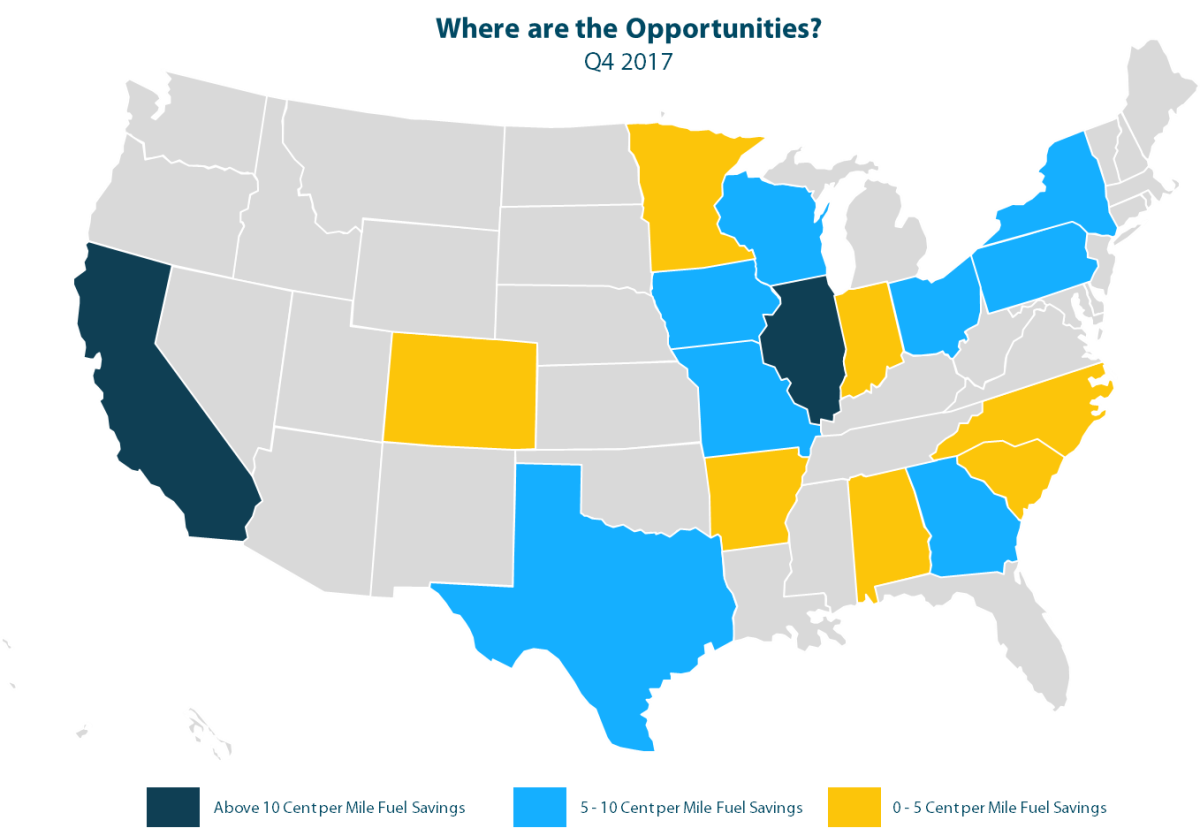 California has long been the driving force of alternative energies in the nation.  The state tax change for diesel fuel of roughly 30 cents per gallon on November 1st 2017 – which did not affect CNG prices – vastly increased the savings potential of moving to a CNG strategy.  State carbon programs—including cap-and-trade and the low carbon fuel standard (LCFS)_—_will continue to strengthen economics for CNG and other alternatives throughout the next decade.  California ranked as the fourth highest state for Breakthrough®Fuel client over-the-road diesel consumption in 2017, indicating substantial opportunities for our clients.

The state of Illinois presents a unique opportunity for heavy freight volume and CNG conversion economics.  The ability to match over-the-road freight or drayage operations into major rail hubs creates ideal conditions for CNG usage.  Furthermore, the surrounding states display favorable natural gas economics for conversion.  Illinois represented the state with the second most over-the-road consumption of Breakthrough®Fuel clients in 2017.

As a shipper looking to limit volatility in both their transportation budget and fuel portfolio, starting an investigation into a CNG program is a good place to start. Backed by the right data and industry insights, investing into your own fleet, or incentivizing carriers to make a switch is possible.

Contact us for more information about Breakthrough Advisory Services, or read more about the latest in industry topics on our blog.