Are You Prepared for California’s Diesel Fuel Tax Increase?

As of last month, it has been nearly twenty-five years since the last federal diesel tax increase in the United States, and data suggests it is long overdue. At 2.4% of annual GDP, this puts the U.S. near the bottom of the pack for infrastructure expenditures in developed countries. Additionally, organizations like the American Society of Civil Engineers have recently given the U.S. a failing grade in infrastructure quality. Groups like the U.S. Chamber of Commerce, among others, have pushed for increased spending in this area. Without future tax increases to boost funding, the effect on logistics could be pronounced, with delays affecting both manufacturing and final delivery of goods for shippers.

In response to historically lacking levels of investment at the federal level, states taken action to increase funding for roads, bridges, and ports. As the National Conference of State Legislatures recently reported:

Supply Chain Dive describes the trend for states as a “last-ditch plan to repair their failing infrastructures by raising gas prices.”

Among the states listed, California may have the most significant impact on moving goods to market. Home to the largest ports in the U.S., in addition to major regional hubs for logistics firms like UPS, changes in fuel costs for shippers in California will have a ripple effect across the economy. And the changes coming this November are significant.

A 20 Cent Increase in Diesel Taxes, And More

Starting on November 1, 2017, the base diesel fuel excise tax will increase by a flat 20 cents, for a total of 36 cents per gallon. In addition, the existing 1.75% diesel fuel tax will jump to 5.75%. The impact these increases pose to shippers may seem small on paper, but in practice are quite dramatic. Applied to 300 gallons of diesel fuel purchased—roughly the average tractor tank fill up—this would result in an additional $81 in taxes over the previous rates. 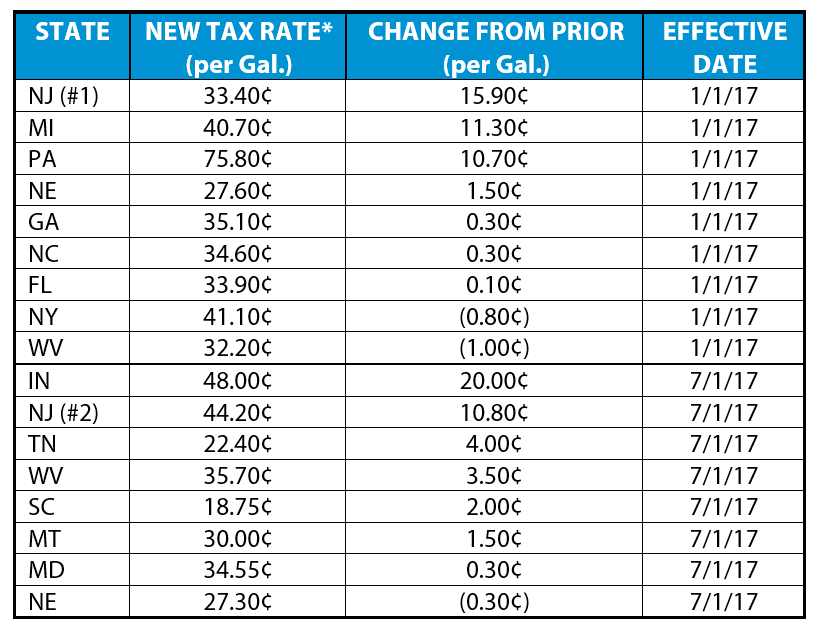 Fuel taxes in the states surrounding California are considerably lower, with the smallest in Arizona at 27 cents, followed by Nevada at 28.56 and Oregon at 30.36. In all, the newly increased taxes bring California up to the second-highest tax rate in the U.S, only surpassed by Pennsylvania at 74.7 cents per gallon.

The California legislation includes a change intended to ease the increased cost burden on the trucking industry.

As reported in CDL Life, “To entice truckers to support the tax hike, Governor Brown added an amendment referred to by environmental advocates as the ‘dirty truck amendment.’” This addition to the fuel tax legislation insulates logistics companies and owner-operators from being forced to upgrade older truck technology to models with a lower emissions threshold “before the truck was 13 years old or had 800,000 miles on the odometer.”

Governor Brown’s intention is to encourage truckers that they, “will get their money’s worth out of a truck before they are forced to upgrade,” according to the same report. ** **

Will shippers receive any benefit from these increased costs? Time will tell, but a couple of items in the legislation hold promise. The new diesel taxes, combined with other fuel taxes and vehicle fees, is intended to raise $5.2 Billion per year for infrastructure, with a stated $365 million allocated for ports and trade facilities. $250 million will be spent to reduce traffic congestion on major corridors in the state.

Congestion does have a substantial economic impact. According to UPS, businesses in the United States are “spending $27 billion annually in extra freight costs and shipping delays that raise prices on everyday products.” As far as ports are concerned, additional investment is welcome as terminals struggle to accommodate the new class of “mega” container ships carrying 13,000 TEUs, 18,000 TEUs, or even higher—double what was expected only a decade ago.

These changes, although significant, do not have to disrupt their reimbursement relationships with carriers on the road, and the increased costs do not need to be left on the negotiation table. Shippers who leverage market-based fuel reimbursements will automatically adjust to the change and will have accurate, real-time data at their fingertips to facilitate strategic conversations within their boardrooms.

For more information about implementing market-based fuel reimbursements in your strategy, contact us.