How Does Summer Driving Cause Diesel Fuel Price Fluctuations?

In the US, the summer driving season occupies the majority of the summer months, and in this time refiners across the country ramp up production of transport fuels following spring turnarounds and maintenance.

While the actual dates bookending driving season are disputed, generally the period between the US holidays of Memorial Day and Labor Day is accepted and known as a period of particularly robust gasoline demand—hence the nickname, driving season. While gasoline demand and prices may experience the most significant change over the summer, this unique period of seasonal demand also comes with plenty of price implications for diesel and other refined products.

In 2019, driving season demand accelerated as crude oil prices tumbled over 20 percent from the middle of May to the Middle of June. Lower prices helped gasoline and diesel prices fall while gasoline demand topped its all-time record ahead of the US July 4th holiday weekend, according to the US Energy Information Administration.

Whether lower prices for transport fuels persist through the summer will be the topic of much speculation. Trade disputes and growing tension across major oil-producing countries like Venezuela and Persian Gulf nations are among the leading topics swaying market sentiment as of late.

While such risks will continue to drive volatility into the market, clearer economic fundamental trends will play out across transportation fuel markets influencing prices over the coming months.

First, the steep increase in demand for gasoline will boost its sales and likely encourage US refiners to operate at their highest utilization rates of the year. Gasoline continues to dominate refinery yields as the product accounts for the vast majority of the average refined barrel across the US. As gasoline demand picks up around Memorial Day, refineries are economically incentivized to maximize the use of their operable capacity. This important run rate is known as a refinery’s utilization and is a key metric for the US refining industry and its core consumers – particularly consumers of transport fuels like gasoline and diesel. 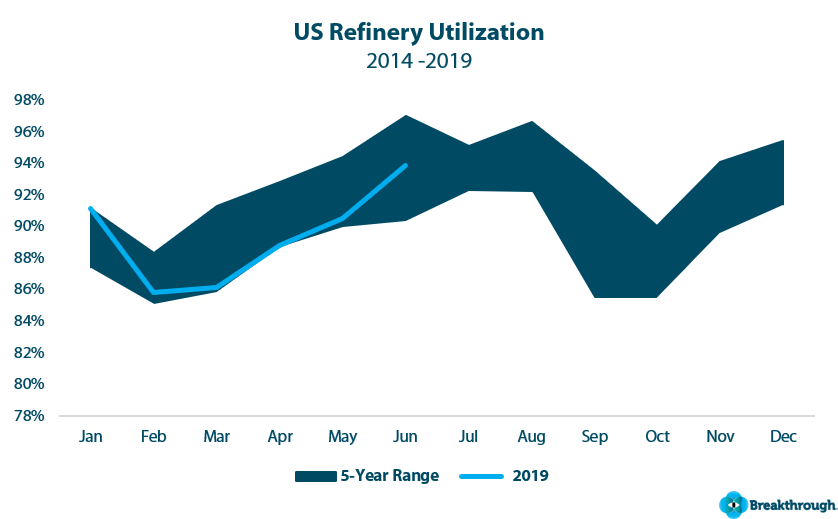 US refinery utilization rates have peaked during the months of June through August every year since 2003, and most commonly peak in July. Increased demand for gasoline during the summer months incentivizes refineries to maximize their gasoline production, increasing the amount of crude oil run through refineries (more simply known as crude runs) to produce as much of the US’ favorite transport fuel as possible.

Gasoline production cannot be drastically increased without simultaneously boosting diesel production. They are both produced among a myriad of other refined products as a barrel of oil runs through a refinery. In the United States, the average refinery will produce about 19 gallons of gasoline and 11 gallons of diesel from a single barrel of crude oil that, in total, will generate about 45 gallons of petroleum products. So as refinery utilization increases to maximize gasoline output, diesel production follows.

Seasonally speaking, the good news for major freight movers is that diesel demand does not peak at the same time as gasoline demand so driving season usually offers price relief for diesel fuel. The monthly average wholesale price of diesel fuel in the United States has decreased from the month of May to June during nine of the past ten years. 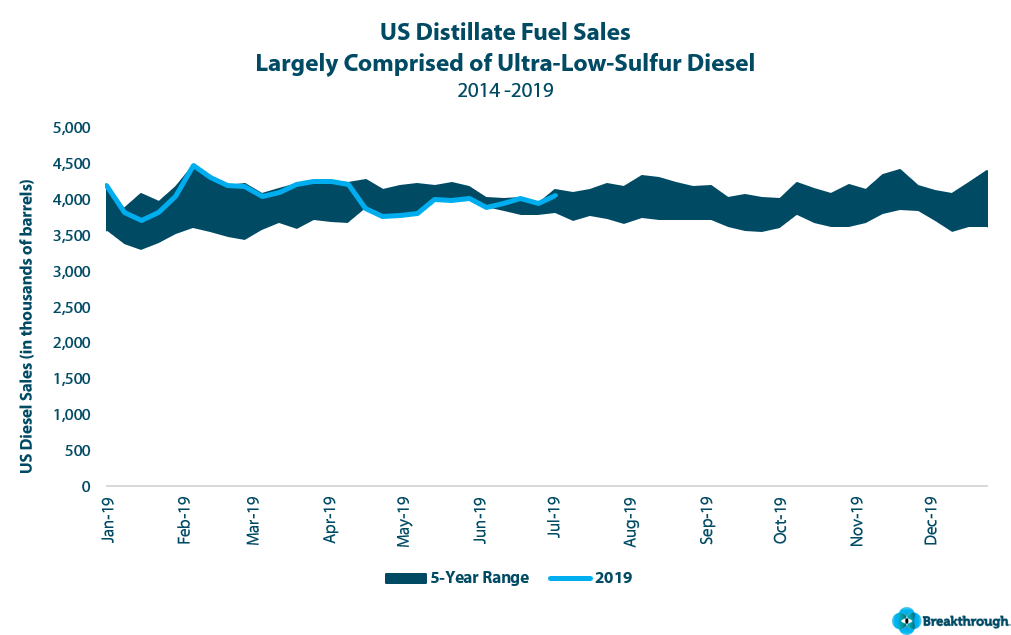 Overall, diesel fuel sales are fairly consistent throughout a calendar year and unlike gasoline have more limited seasonal changes. Diesel sales do typically peak in both the spring and autumn, however, bookending the summer driving season. Spring sales typically peak in May as agricultural production ramps up, before slowing through summer. The end of the summer driving season also brings about greater demand for diesel for agriculture and across other industries, such as for retailers, which helps diesel typically reach its autumn sales peak in November.

On average, May has represented the month of peak diesel demand over the past five years, but diesel demand commonly increases in the spring and autumn as the seasonality of agricultural production factors in. Wholesale diesel prices have trended with these demand patterns and refinery utilization while being jostled by volatility from other market-moving events. Prices experience relief through the combination of demand slightly relaxing and refineries focusing on increasing the supply of gasoline and therefore pushing more diesel into the market. 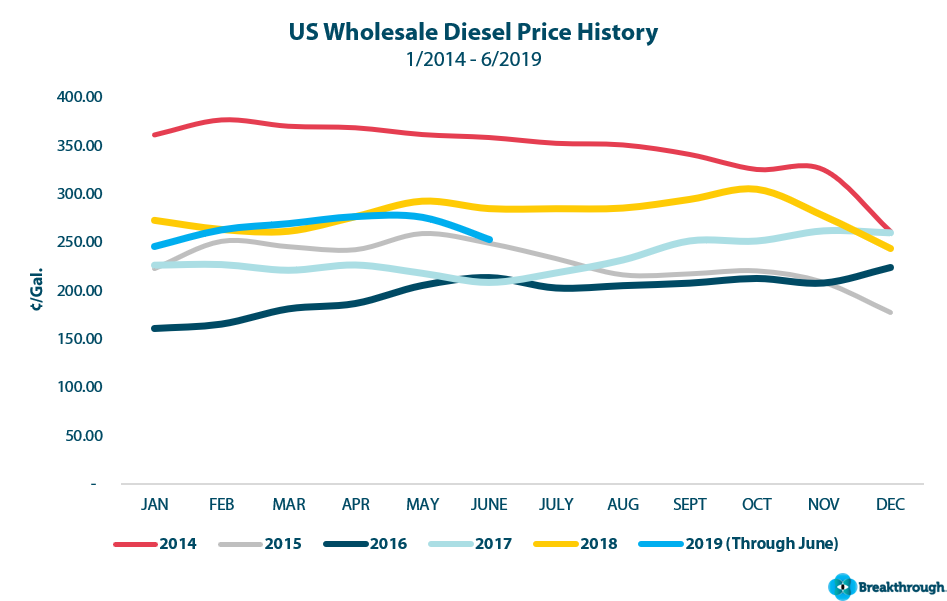 Wholesale diesel prices show the summer driving season offers downward price pressure as diesel demand subsides from late spring. While plenty of other market drivers influence diesel prices outside of seasonal demand, particularly as both supply and demand shocks occur within global crude oil markets, the effects of the driving season have historically offered a trend to project prices from.

Agricultural and seasonal increases for diesel demand from other sources, such as retailers, begins to ramp up with the end of the driving season. The end of the season drives refinery utilization lower, since gasoline demand fades, and diesel production also slows. Unfortunately for diesel lovers, the seasonal cycle of the driving season coming to an end, therefore, contributes upward price pressure for diesel through increasing demand and decreasing production.