In a price environment largely driven by geopolitical risk, supply-demand complexities, and economic principles, the operational variables that influence market prices often fly under the radar. Achieving transparency into all upstream and downstream drivers of transportation fuel spend creates a competitive advantage in your supply chain, with refinery maintenance season being one example of a market influencer that can create distortion in the marketplace.

Refinery maintenance occurs multiple times over the course of a calendar year – typically following periods of high demand and in preparation for operators switching seasonal product blends – and adds an element of intricacy to refined product price behavior. Refining units that go offline during each maintenance season impact both the crude oil and refined product side of the marketplace. Crude oil inventories likely expand as the lower demand for oil inputs into refineries create an inventory buffer in the oil market, depending on other upstream variables that also impact oil metrics. Similarly, the offline production capacity often penetrates the supply-side of the refined product industry, creating increased likelihood that price volatility in spring and autumn is often influenced by supply uncertainty. Though maintenance schedules, longevity of the offline refining processes, and magnitude of the supply loss vary each year, the overarching theme of supply-demand complexities stemming from the offline output affects numerous aspects of the crude oil and refined product supply chain.

Specifically focused on the fall maintenance season, the dark blue line shows inventory levels of distillate fuels – such as diesel – in September, as this is typically one of the last months of conducting normal operations before maintenance schedules take form in October and November. Inventory stockpiles are often leveraged to minimize large-scale and/or extended windows of upward price pressure for refined products. As evidence, the chart below highlights declining US distillate inventories in October and November, before a re-build occurs in December with the resumption of standard operations. While annual inventory levels vary, a strong correlation of lower inventories as maintenance seasons advance is evident. 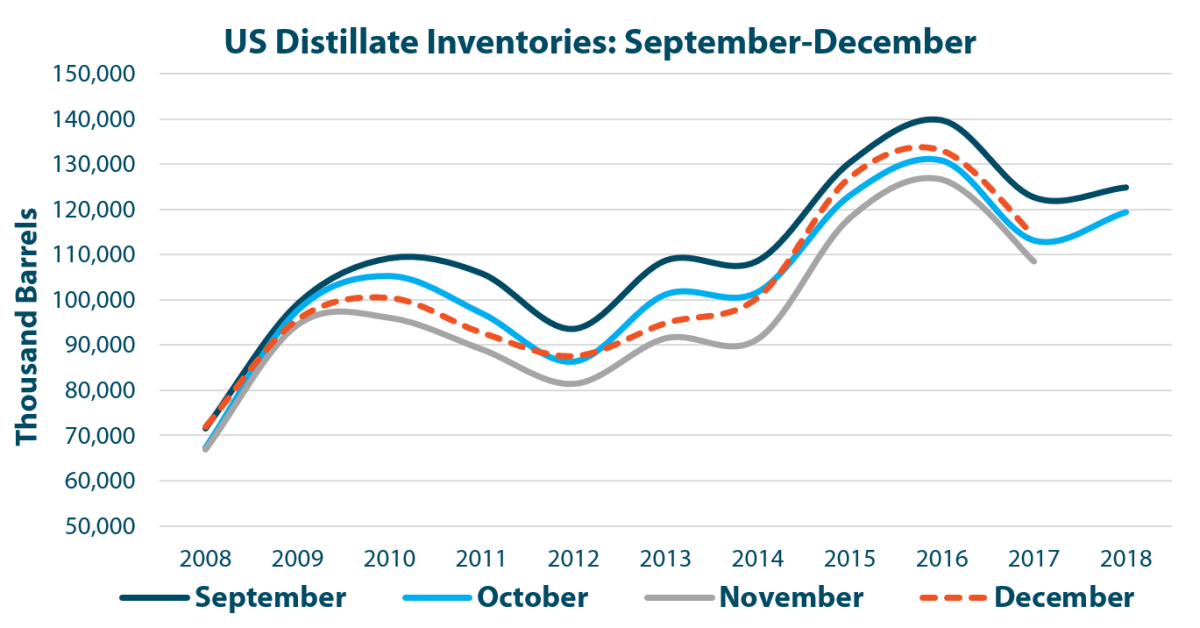 Refinery utilization rates, loosely defined as the volume of crude oil inputs relative to the overall refining capacity, share a direct correlation with refinery maintenance schedules. As straightforward as it may seem, offline refining operations remove production capacity from the refining landscape, while also increasing the risk of additional operational issues surfacing during the shutdown period. Large volumes of refined products, in turn, are unavailable to consumers, making maintenance season an interesting time for supply-demand fundamentals and price uncertainty.

The chart below shows a historic view of refinery utilization rates in the United States dating back to 2010. Similar to the chart above, September and October are points of emphasis, as these months reflect a “before-and-after” perspective of fall maintenance season for US refiners. Aside from 2017, October refinery utilization rates are noticeably lower than September, emphasizing the notion that less production capacity is readily available in the refining landscape.  When Hurricane Harvey hit the US Gulf Coast refining region and caused a substantial portion of the US refining infrastructure to go offline in September 2017, petroleum product prices were impacted on a national scale. Though this loss of production capacity was an anomaly in terms of magnitude and market impact, a more subdued affect is experienced during refinery maintenance season, depending on geography, longevity of the outages, and current market tendencies. 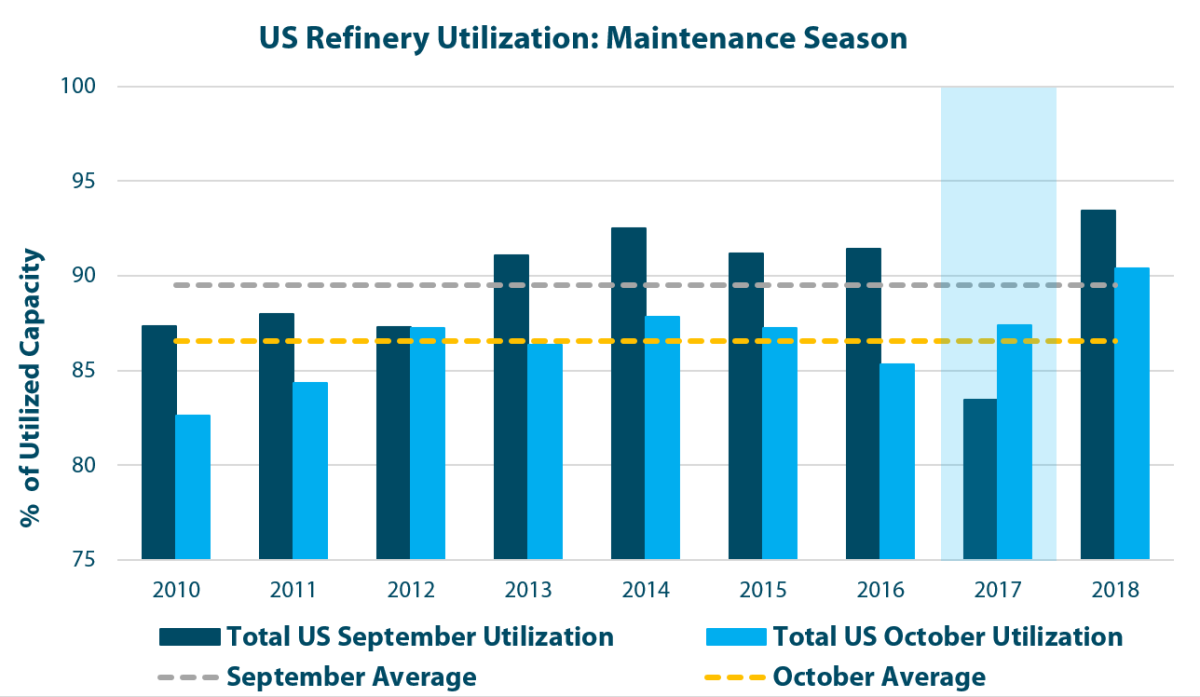 Market events at the refinery level, whether planned or unplanned, set the stage for price behavior of petroleum products that fuel your global transportation supply chain. To discuss refinery operations and other drivers of price behavior, and to gain visibility into the numerous variables that play a role in the crude oil and refined product industry, contact the Applied Knowledge team directly.