What is the IMO 2020 Sulfur Regulation?

Beginning January 1, 2020, the International Maritime Organization (IMO) is calling for the reduction of allowable sulfur content in marine fuel from 3.5% to 0.5%S m/m. This regulatory event is known as “IMO 2020,” and it will affect transportation fuel spend for both the maritime and trucking industries.

This emissions regulation is not new. It was first announced in 2008 and was later supported in 2016 by a study released by the consultancy CE Delft under the direction of the IMO. Despite having over a decade to prepare for tighter emissions standards, both the maritime shipping and refining industries have been in a scramble throughout 2018 and 2019 to prepare for this fuel market evolution.

Currently, ocean vessels use high-sulfur fuel types that create detrimental emissions when burned. Respiratory distress and decreased lung function in humans, threatened biodiversity, acidified waterways, and acid rain are all challenges that stem from this use. For these reasons, among others, the IMO voted to aggressively abate sulfur oxides (SOx) emissions.

Why are IMO 2020 Sulfur Regulations Important?

Part of what makes the IMO 2020 regulation stand out is its magnitude. Sulfur content is being slashed to one-seventh of its previous allowable limit, as referenced in the chart below. These regulations are the most significant change in fuel specifications seen in decades. 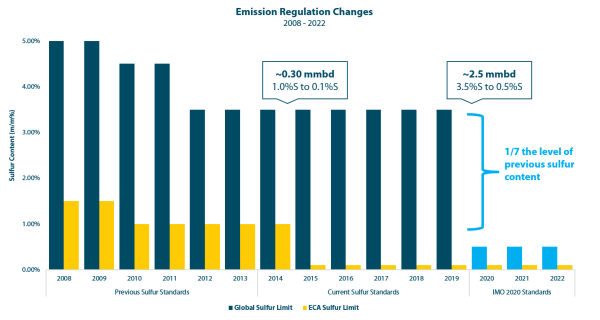 Change this significant comes at a cost and will have cascading effects from refineries, to shippers, carriers, and consumers.

IMO 2020 Comes at a Cost Across the Industry

Although vessel operators will be directly responsible for compliance of these regulations, the final costs of the transition will most likely be passed off to shippers—which is why transport managers across the industry should pay attention.

It is expected that about 2 million barrels per day of low-sulfur fuel will be needed to meet the shift in market demand. This is equivalent to about 2 percent of world oil demand.   Increased demand for low-sulfur fuels, will create price premiums, over-the-road-diesel included.

Though IMO 2020 regulations are significant and much of the industry is buzzing about their implications, these changes are not held in a vacuum. Throughout history, emissions regulations have become ever more stringent, and this change signals the continuation of the trend towards cleaner emitting transport.