Geographical climate policies surface every year, since implementing sustainable methods to control emissions remains a frequent topic of international discussion. The emergence of efforts by leaders from business, industry, economic, and government illustrates the global commitment to creating a strategic approach to addressing carbon reduction—ultimately seeking mitigation of climate change. Fostering innovation through energy-efficient technologies and a more-monitored approach to conducting operations has been the catalyst for such initiatives, because governing bodies view carbon-reduction efforts as a foundation for global change.

In terms of scalable carbon reduction strategies, more specifically incentivizing low-carbon emitters and penalizing the carbon culprits, cap-and-trade programs and carbon taxes are two of the more prevalent approaches to control harmful greenhouse gasses. Establishing a means of compliance to later achieve emissions reduction objectives is the primary goal of such efforts, with specific cost implications for carbon-intensive fuels in your global transportation supply chain.

Carbon tax programs directly establish a monetary penalty on carbon emissions as a more direct approach to mitigating the harmful effects of carbon emissions that catalyze climate change. The combustion of fossil fuels and the respective carbon emitted from fossil fuels such as diesel, present an opportunity to levy taxes on the combusted product at any point throughout the product lifecycle. Essentially, carbon taxes increase revenue without drastically altering the tax structure of an economy, while simultaneously alleviating the effects of climate change. The generated revenue typically stays within the taxed region, and is later reinvested into additional technological advancements, carbon-reduction research, alternative fuel adoption, or other innovations that ultimately reduce emissions and provide opportunities for emitters to capture a lower tax rate. It is important to note most carbon taxes around the world are levied on the actual energy products being consumed, rather than on the carbon dioxide emissions directly, ultimately impacting the cost of fuels that move goods to market.In a society striving to minimize its overarching carbon footprint, proactive measures to promote such initiatives have emerged around the globe. One country is currently developing a long-term plan to reduce carbon emissions, with provinces and territories having the flexibility of choosing either a carbon tax or cap-and-trade program.Here’s an overview of Canada’s emissions reduction plan.

Canada has taken an active stance in reversing climate change in recent years, as the nation’s development of the Pan-Canadian Framework in 2016 provided one of the largest carbon-reduction initiatives in North America to date. The Pan-Canadian Framework was established to achieve emissions reductions, strengthen the Canadian economy, and diminish the effects of domestic and international climate change. The collaborative effort between provinces, territories, and indigenous groups essentially built a program that imposes a price-based mechanism on carbon pollution, with the end goal of reducing greenhouse gas emissions across all sectors of the Canadian economy. Innovation and technology development are key drivers of overall program success, ultimately incentivizing businesses to compete in an evolving low-carbon environment. The table below shows the carbon price impact on diesel fuel, revealing carbon’s future emergence as a more substantial portion of the diesel cost buildup.

The chart below shows the cost implications of Canada’s government-mandated carbon structure. A baseline diesel commodity cost and federal tax, national average provincial tax, and a standard freight charge are included in the buildup. Also incorporated is the carbon component, as indicated in the grey portion of each bar. The figure below quantifies carbon’s emergence as a growing element of the cost of diesel, ultimately consuming an increased percentage of each liter of diesel in the coming years. 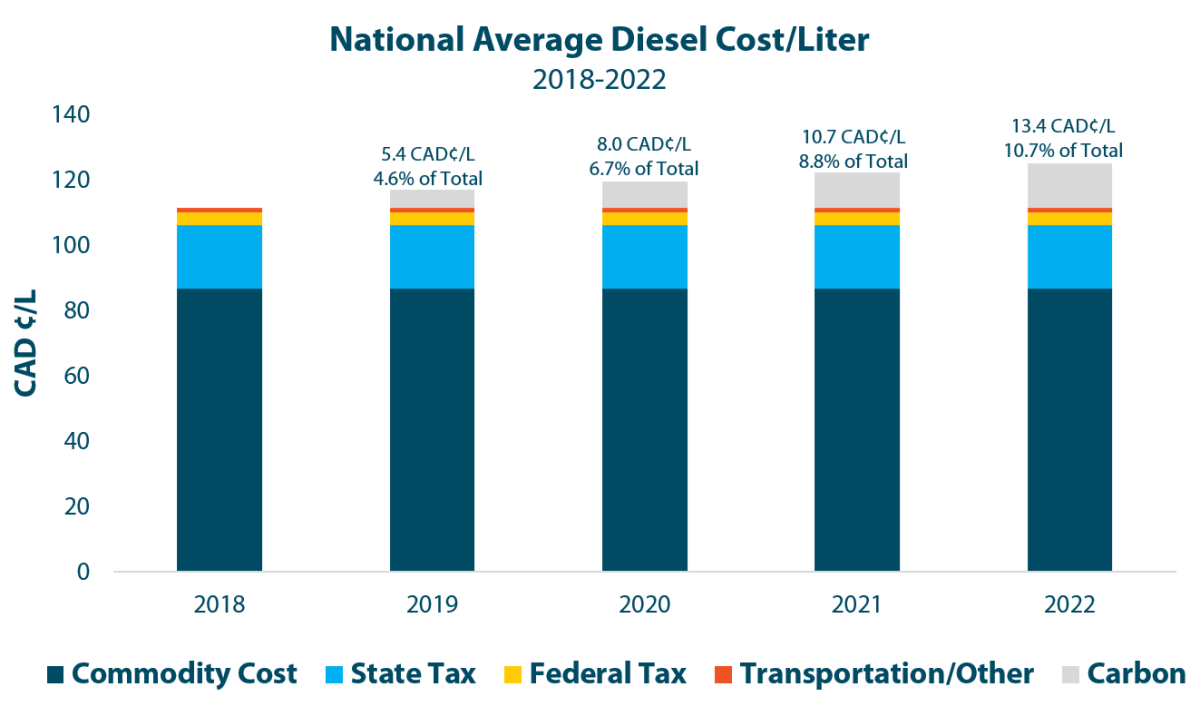 While Canada is but one example of a nation currently active in a nationwide carbon movement, many other geographies have been, and continue to, incorporate carbon pricing into petroleum products. Gaining visibility and achieving transparency into all portions of fuel costs within your transportation network creates a competitive advantage in your supply chain. To learn more about carbon pricing mechanisms, such as cap-and-trade programs and standard carbon taxes, and how they impact the cost of fuels that move products to market, contact the Applied Knowledge team directly. Interested in reducing cost, consumption, and emissions in your transportation supply chain? Contact Breakthrough here.