California is known for having some of the most extensive regulations to reduce greenhouse gas (GHG) emissions in the United States. One example of its most successful commitments to reducing emissions is California’s Low Carbon Fuel Standard (LCFS).

The goal of California’s LCFS program is to reduce 20 percent of carbon emissions throughout the entire energy life cycle by 2030. 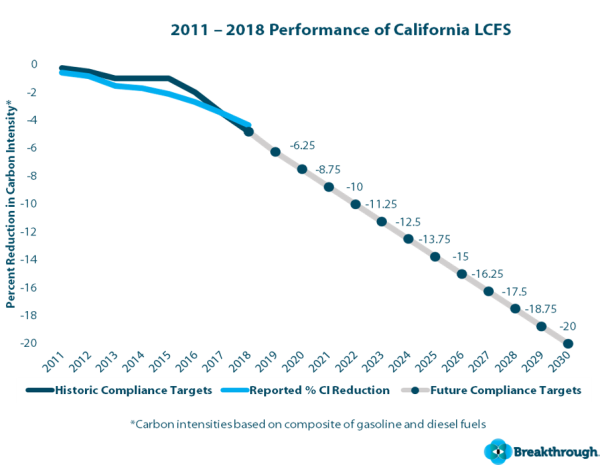 The chart above highlights California’s targets for reducing carbon intensity through 2030. The light blue line indicates compliance has met or exceeded imposed targets through 2018, though loftier ambitions in the coming years could create compliance complications.

This program sets a limit on the number of allowable carbon emissions that transportation fuel producers and importers are collectively allowed to produce. This limit is known as the carbon intensity target and it looks at the entire life cycle of each energy type from production to consumption. The state government reduces this target each year, achieving the 2030 goal incrementally over time.

The 20 percent reduction is a collective goal, so to ensure that the entire transportation fuel landscape reaches this target, each player must quantify the level of emissions they produce.

To do this, producers and importers must undergo a strenuous process with the California Air Resources Board (CARB) to analyze carbon emissions released throughout the entire life cycle of their transportation fuel. From this information, CARB allocates a carbon intensity score.

The following graph illustrates carbon intensities by fuel type—diesel is one of the most carbon-intensive, while specific RNG pathways represent the lowest carbon intensity of all fuel types. 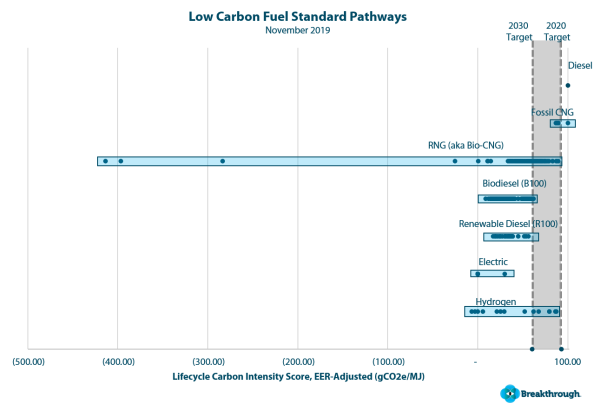 Even within a single fuel type, the sourcing and method of fuel type generation influence a range of carbon intensities. Here, the dotted line for 2020 indicates whether a carbon intensity score would equal a deficit or a credit.

Receive Either Credits or Deficits Based on Your Score

When held against the current year’s state-mandated carbon intensity target, each fuel’s carbon intensity results in either a carbon deficit or carbon credits. Producers must net carbon emissions no greater than the target.

Diesel, for example, creates a deficit due to its high carbon intensity score, which will continue to generate greater deficits year-over-year as the targets become more stringent.

Producers and importers of transportation fuel can meet the LCFS carbon intensity target in one of two ways:

The challenge of some fossil fuel producers transitioning to lower-carbon fuel options, like renewable natural gas (RNG) or biodiesel, is often far too great to be feasible. This makes LCFS trading a vital part of the regulation. To ease the challenge of meeting carbon intensity targets in the near term, producers and importers can purchase additional low carbon fuel standard credits from organizations that are already under their target. This is much like the more traditional cap-and-trade system California is known for.

The Low Carbon Fuel Standard is designed to incentivize the production of cleaner fuels and processes while keeping these changes within a reasonable scope.

First, LCFS encourages large firms with high levels of carbon intensity to work towards the specified emissions targets in the future. Without credits, the cost of achieving designated carbon intensity targets would be vast. Some firms would likely opt to incur fines because they cannot afford to make sizable investments all at once.

The credits system allows these changes to be made over time, making both change management and the economic burden significantly more feasible. With the understanding that these changes will continue to be ushered into their operations, they are given a longer time frame to adjust their strategy in preparation.

On the other side of the equation lie firms who are already under their carbon intensity targets and have credits to sell. These organizations have an incentive to make continuous improvements to their processes, becoming ever cleaner and more efficient to generate credits. This creates an opportunity to reap the economic benefits of credits generated.

In all, both sides of the exchange benefit greatly from this facet of the LCFS legislation, making it one of the more successful carbon programs the United States has seen in recent history.

One of the characteristics that make LCFS most accessible to organizations of every size, and as a result extremely successful thus far, is its flexibility. The state of California does not mandate how to meet carbon intensity targets. Rather, individual organizations get to strategically decide how their organization is best poised to meet its yearly target. This opens opportunities for organizations operating in California to invest in better energy management, data, and reporting metrics that fit within their overarching corporate sustainability strategy. 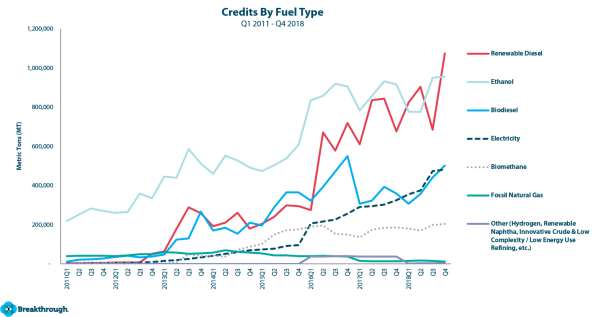 The LCFS program is having a positive impact on alternative fuels use in California.  California’s widespread consumption of biodiesel, renewable diesel, and renewable natural gas has recently grown at a greater pace than the national average. The program shows renewable diesel as the biggest LCFS credit generator in the last two years, illustrated by the red line below.  Electric vehicle credits have also been on the rise since 2016, though mostly through light-duty vehicles.

The LCFS program, along with cap-and-trade, is approved to continue through 2030, allowing program certainty and ensuring positive impacts in the long-term.

Shifting market share away from conventional fuels toward more low-carbon options comes with many challenges. The additional upstream costs derived from the LCFS program will likely drive the price of high-carbon fuels upward in the near term. Current weekly average LCFS prices hover around $200 per metric ton of CO2, creating a roughly 17 cents per gallon upstream price premium on diesel fuel. Assuming available credits continue falling and credit prices continue climbing, additional costs will be incorporated into upstream production, with the likelihood of adding premiums.

With the continuous lowering of the carbon intensity targets leading up to the year 2030, credit prices are predicted to rise, larger deficits for conventional fuels are likely, and credit generation is predicted to come to a halt to meet the upcoming annual targets.  As a result, demand for LCFS credits will soon outweigh supply, driving the price of the available credits upward.

This, in turn, will create a growing cost for users of conventional fuels due to their required reliance on low carbon intensity producers who have credits available. Low carbon intensity credit holders will be able to create a price premium for their available credits, resulting in higher prices for conventional fuels, such as diesel, and a growing financial incentive for use of low carbon or renewable fuels.

When looking at the long-term outlook for alternative energies, it has become clear that the economically viable strategy for shippers and manufacturers operating in California is to invest now to prepare for the future.

The ability to execute a well-planned energy management strategy will be the difference between capturing the financial and sustainability benefits of a low-carbon supply chain or falling victim to the increasing cost of carbon.