Crude oil needs to move. To get from oil wells to refinery and storage facilities, millions of barrels of crude oil need to be transported in one form or another to ultimately become end-use products. After oil companies successfully extract oil products from the ground, they must consider infrastructure, geography and cost implications to determine the best mode of transportation. The best options for their energy supply chain will move products while minimizing costs and maximize their bottom line.

Oil and refined products are transported twice throughout the crude oil supply chain: first upstream from wells to refineries, and then downstream from a refinery to the market.

Ranked cheapest to most expensive, oil products are moved via the following methods of transportation:

The chart below illustrates each transportation mode’s historic prevalence in the United States. Pipeline and ocean vessels have historically been the most common forms of carrying crude oil to refineries. Rail and truck movements, however, have gained traction in the past decade due to lacking pipeline infrastructure and operational constraints in certain geographies. 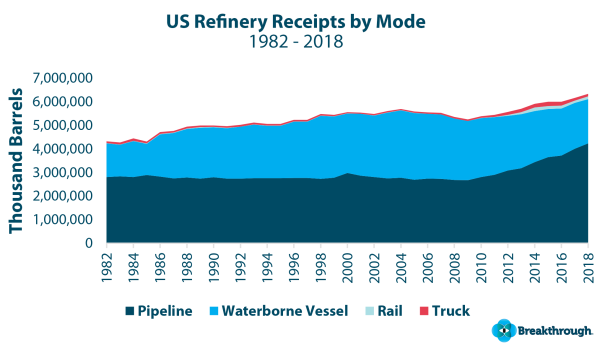 Crude oil pipelines are the most common, safest, and cheapest of all modes of crude oil and refined product transport. With a high upfront investment cost their long-term payoff comes from decades of use. Pipeline networks are built to transport crude oil from nearby oil wells to oil tankers long distance.

Marine transport, largely via barge or tanker, is the second cheapest mode of oil shipment. This is especially true for companies that export crude oil internationally. The world tanker fleet currently contains approximately 4,200 vessels, 85 percent of which are owned by independent tanker companies with the sole purpose of transporting oil products from border to border. Smaller vessels typically transport “clean cargoes” which are refined products such as gasoline, diesel, and jet fuel. Large tankers—averaging 2 million barrels of crude oil per movement—however, carry dirtier cargoes like crude oil and unrefined commodities. 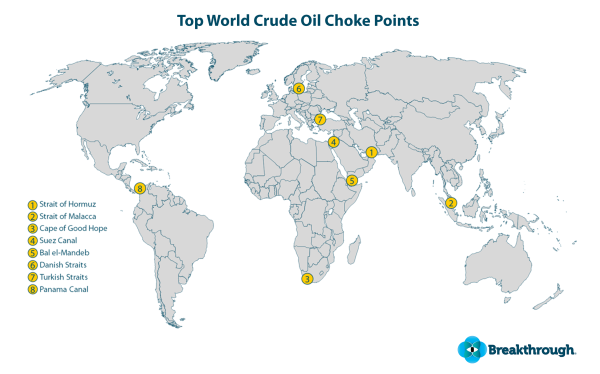 The global vessel fleet faces several operational constraints. To satisfy global demand and facilitate the adequate flow of crude oil to appropriate markets, high traffic areas often experience chokepoints. Some of the key international marine chokepoints are highlighted in the map above. 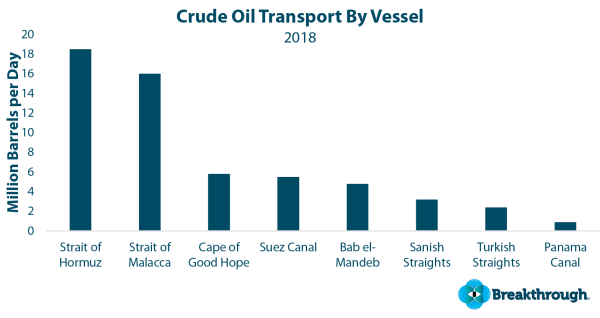 These key global chokepoints are also shown in the chart above, ranked by their daily transit volumes from the most recent five years of available data. The risk associated with geopolitical activity impacts the flow of crude oil through these chokepoints, ultimately creating supply and price pressure in the destination regions.

Crude oil movements by rail spiked in 2013, increasing by roughly 31 percent from 2012 values. This was due in large part to the domestic oil boom that flooded surplus oil into the US market. This excess created insufficient pipeline capacity and opened the door for rail transport as the next-best alternative to move oil. That said, crude-by-rail movements have decreased since 2015. As the WTI-Brent price spread narrows and pipeline capacity expands, pipelines once again become more optimal.

Not all oil wells are accessible via pipeline, making rail the most financially feasible option for accessing land-locked oil wells that later feed the refining landscape. The sustained growth of US shale production has increased domestic production to record levels, again creating pipeline capacity concerns and increasing overall utilization of rail transit.

Over-the-road transportation is the most expensive and inefficient means of crude oil transportation. The amount of crude oil an average truck can transport is only between 200-250 barrels of oil per movement. This makes it an expensive and inefficient option. This method is typically utilized only when wellhead locations are not accessible by pipeline or rail networks, or for short distances during final-mile segments of the movement.